The vast majority of Larsen traps are used by gamekeepers in their quest to destroy as much wildlife as possible. However, some mindless and inhumane people set Larsen Traps in private gardens to catch and kill magpies. They have usually seen a magpie rob a bird’s nest and set out with vengeance. However, research commissioned by the RSPB shows that magpies are not responsible for the decline in songbirds. However, this is no comfort to people who have seen a garden nest robbed of its eggs. 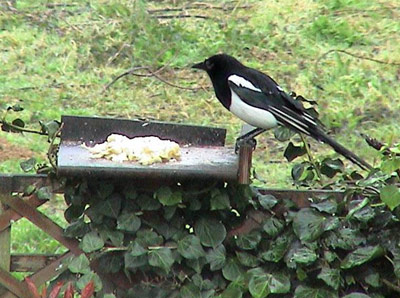 The answer to the problem lies in creating a less fussy and wilder garden: thorny bushes, plenty of ivy; a pruned Hawthorn hedge is ideal. The next step, paradoxically, is to encourage the magpie into your garden by providing a high feeding station (see picture above). Get into a routine of placing household scraps on the platform each day. Many birds will benefit, and the magpies will be far less inclined to look elsewhere in the garden.

Bird nest boxes placed in gardens can make a real difference to the success or failure of a breeding species in a given area, especially when accompanied by the regular supply of suitable food and water.

In the unlikely event of problems your wooden nest boxes, then a Bird Guardian is the answer. It makes it much harder for predators to gain access to the box but still allows the parent birds easy access.

There are a variety of bird boxes that are predator proof and are available from many suppliers.

Unfortunately the reality is that many people who wage war of so-called predators have no interest in songbirds, they are bloodsport fanatics and it is impossible to reason with them.