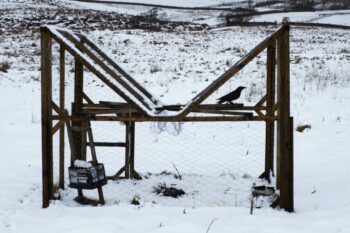 On 4th January 2021, Wild Justice wrote that “the job description for gamekeepers in England has changed dramatically”. The government had issued its latest licence on ‘controlling’ wild birds and its guidance further restricted the legality of killing corvids. But there are already signs the change will be ineffective.

This licence allows you to carry out activities in relation to certain species of wild birds, for the purposes of conserving endangered wild birds

Larsen and ladder traps are used by gamekeepers on shooting estates to capture corvids. These birds take pheasant and partridge eggs. The Game and Wildlife Conservation Trust (GWCT) said in an undated study that 20% of pheasant eggs lost to predation are taken by corvids, in particular carrion crows. The shooting industry therefore considers them a threat to economic interests.

However, a BTO study published in 2019 by the British Ecological Society revealed positive correlations between pheasant and corvid population growth. A press release accompanying the study said it had:

identified positive associations between the occurrence patterns of gamebirds and the abundance and population growth rates of several generalist predators, including the common buzzard and various members of the crow family.

This suggests that it’s the shooting industry creating the corvid ‘problem’ in the first place.

The Citro asked Against Corvid Traps (ACT) about what the changes are likely to mean in practice, particularly in the setting of traps. “While the wording has changed, for landowners and gamekeepers I imagine nothing has,” said spokesperson Simon Wild. He continued:

I could see a gamekeeper on a pheasant shoot telling a police officer he has some wild grey partridge, or even that the landowner wants to protect song birds as an excuse for setting ladder or Larsen traps.

A blog post by Mike Swan, head of education for the GWCT, bears this out. On 21st January, Swan wrote about his expectations for “corvid control” in light of the new GL40 restrictions. Swan is critical of what he describes as the new restrictions “cherry [picking]… as to which species matter and which do not”.

Swan went on to highlight a number of loopholes that are exploitable. First, as ACT suggested, he said traps could be set to protect grey partridges and songbirds:

Now, between the grey partridges on the more open part of the shoot, the farmland birds like skylark, corn bunting and the odd turtle dove, and the woodland birds like song thrush, marsh tit, dunnock and stock dove, I have ample reason to be running my Larsen traps as normal.

Second, Swan pointed out that corvid control is still permissible under General Licence 42 (GL42), which lay out measures for controlling wild birds in order to prevent serious damage to crops and livestock. On this, Swan said:

These two [crows and jackdaws] have been removed completely from [GL40], although they remain on the licence to prevent serious damage (GL42). So, again, I can say that I am controlling them to protect the boss’s chickens, and to stop them from pulling up the spring beans, and there will be truth in this at times.

Corvids repeatedly demonstrate cognitive abilities that impress scientific researchers. A New Caledonian crow named Betty made headlines in 2002 for her problem-solving abilities. Since then, other species of crow including the carrion crow have shown similar skills under observation. This led ACT to tell The Citro that loopholes in GL40 are “a shame” because:

corvids are highly intelligent and crows are equal to the great apes intellect.

Wild Justice claimed in its 4th January post that the changes in GL40 from its predecessor GL34 is “a result of Wild Justice’s legal challenges” to the large-scale release of pheasants and partridges. The group submitted its challenge in November 2018 and succeeded in October 2020.

The group also said that “Gamekeepers operating crow traps will have to learn a new vocabulary to explain to the public what they are doing and why.” However, it appears gamekeepers already have this vocabulary at their disposal.