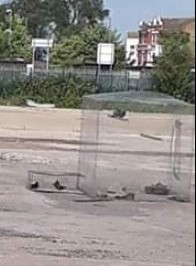 We wanted to know what is the situation regarding cutting
flight feathers on crows being used as decoy birds?  Also, a
Larsen manufacturer provides only a 10 inch metal shelter
for the decoy.  Should the person setting the trap not
provide more shelter?
Reply from Ian Dillon, Natural England:
General Licences are issued by Natural England under the Wildlife and Countryside Act 1981
(as amended) and with each licence there are a number of conditions that must be complied
with. For the trapping of corvids using Larsen traps, or similar, these are listed under the
Standard Licence Conditions for trapping wild birds using decoys under a Natural England
licence.
The relevant sections regarding cutting flight feathers and providing shelter
are found under: Section 7 Treatment of decoy birds which states ‘Decoy birds are not to
be winged clipped because if they escape or are released from the trap then they would be
highly susceptible to predation or to attacks by territorial birds.’

Section 9 Definitions which states “Appropriate shelter” decoy birds are to be provided with
shelter that provides effective protection from rain and direct sunlight under the prevailing
and anticipated weather conditions. For this reason, transparent Perspex is not considered
suitable. What is appropriate will be influenced by the location of the trap and its exposure
to the elements. As such, it may be necessary to take advantage of natural cover to provide
additional protection. The shelter provided must be sufficient for the total number of decoy
birds present in any trap.
The Animal Welfare Act 2006 also applies to trapping corvids and a Natural England Wildlife
Management Advice Note.
It is also worth noting that BASC have provided advice on the use of General Licences and
trapping corvids which may be of interest to you.
While Natural England issue the General Licences it is my understanding that the Police have
the enforcement power. If you have any concerns regarding the use of a trap under a
General Licence and whether it complies with the conditions in that licence then the local
Wildlife Liaison Officer should be informed via the non-emergency telephone number 101.
Natural England would then assist the Police if requested to do so.
We sought further clarity and received:
However, from the General Licence is it is clear that if temperatures rise and cloud cover
declines then it may be reasonable to expect greater shade provided in warm sunny days
than compared to cooler cloudy days. This could be either physically creating cover or
moving the trap to a more shaded location.

 We have sought advice from police regarding the 101 number, and if a bird is
suffering/ injured badly and neglect has occurred, then you can phone 999